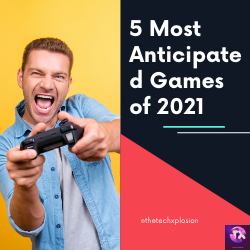 The video game industry is thriving more so than ever before. After all, it provides one with quality entertainment. Also, it takes away all the worries and lets you travel to a fantasy world where sometimes your actions may have major consequences (cue to games like Grand Theft Auto & Red Dead Redemption series). This means that video games allow you to develop decision-making skills.

The beauty of video games is that you can either enjoy them alone or can play them alongside your best buddies. Moreover, you can have fun playing them with strangers online! But for that, you will need to have a stable internet connection. Personally, I’m happy with Spectrum WiFi plans.

2021 is going to be a pretty exciting year for gamers all across the world. The reason? New titles! A lot of famous video game developers such as Riot Games, Relic Games, and Techland have announced to release their latest masterpieces. So, let’s take a look at five of the most awaited games that you get to enjoy this year.

The fans of the first Horizon game, it’s time for you to rejoice as the developers behind Horizon Zero Dawn have announced to drop its sequel, Horizon Forbidden West this year. It is an apocalyptic open-world game that will entice you with its unique setting and a great storyline. You will play the upcoming title as the game’s main character Aloy.

This is going to be a pretty unusual game, to say the least. In this title, you will play as a cat. Yes, you read that right! A stray cat that is lost in a post-apocalyptic world where humans are no longer there but robots are. What this game has in store is anyone’s guess. But one thing is for sure, it is going to be a pretty amazing title as it is being developed by none other than Annapurna Interactive who is behind hits like, ‘The Pathless,’ and ‘I Am Dead.’

Another video game that might be on the same level of unusual as Stray is Deathloop. It is an extremely original game developed by Arkane Studios. The tale of the title revolves around two assassins who are trapped in a time loop where they kill each other repeatedly. But while one wants to break the loop, the other wants it to continue. Sounds intriguing right? It is certainly one of those games that need to be played in order to know what happens in the end. A lot of gamers will have high expectations from this, that’s for sure!

If you have a liking for sci-fi games then you are going to love this one. Chorus is developed by Deep Silver, the same publishing company that is behind Metro Exodus, Wasteland 3, and the Saints Row series. If you have played any of those games then you know that they never disappoint. And of course, you can expect Chorus to be a total badass as well. This game will be based in a space-action setting where you will be playing as Nara. You will be on the run from a space cult. This title will blow your mind and by watching the trailer, you would know just how dope Chorus is going to be.

From the makers of Evil Within comes a game that will scare the bejesus out of you. Introducing, Ghostwire: Tokyo! This title has a pretty interesting concept. You are in the beautiful city of Tokyo but no one else is. That’s right. You are all alone, or are you? As you play through the game, you will realize that you most definitely are not. There will be ghosts roaming around that you will have to deal with by using a combination of martial arts and magic. As the game is based in Japan, you can expect the combat style to be heavily inspired by Japanese folklore. All in all, it will be pretty interesting to see what this game has to offer.

And there you have it! These are five of the most anticipated games of 2021. But there are even more titles that you should be equally excited about such as Resident Evil 8: Village, Hollow Knight: Silksong, Elden Ring, God Of War: Ragnarok, and New World. Considering how many fun titles are about to be released soon, this year surely feels like the best one yet for the gaming enthusiasts. So, out of all these upcoming games, which ones are you looking forward to the most?