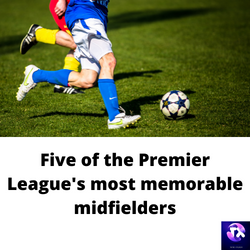 For any football team to be successful, you need a midfielder who makes a difference. Whether it’s driving the team forward and taking the game by the scruff of the neck, sitting deep and breaking up play to protect the defence, or providing the silky touches to set up goal-scoring opportunities, an impactful midfield player is one of the most important things in football.

In the Premier League, we’ve been fortunate enough to see numerous world-class midfielders grace our shores, helping their respective teams become firm favourites in the online betting. Of course, some have stood out more than others, so we’ve put together a list of players that we feel are the cream of the Premier League’s midfield crop. Read on to see who made the cut!

One of the great tragedies in modern football is that Steven Gerrard never got his hands on the Premier League trophy. He came oh-so close in the 2013-14 season, and if it wasn’t for that infamous slip against Chelsea at Anfield, he may well have delivered Liverpool the title, but it wasn’t to be.

Nevertheless, Gerrard is one of the competition’s best ever midfield players. He had a unique ability to seize control of games and almost single-handedly drive his team towards victory. Having notched 120 top-flight goals over the course of his career, he was a midfielder who really knew what it meant to make an impact.

Many have debated who was the better midfielder, Gerrard or Frank Lampard, but the reality is that both deserve their place among the Premier League’s elite. Whilst Gerrard had a more all-round game, no midfielder can match Lampard’s goal return.

The former Chelsea, West Ham United and Manchester City man bagged 177 goals over the course of a glittering Premier League career, earning multiple title winners medals as he made Chelsea frequent picks in the betting tips for free. His knack of knowing where to position himself to get on the end of a cross or loose ball will likely never be matched.

In terms of deep-lying playmakers who had the unique ability to arrow laser-like passes to their teammates, Paul Scholes was a cut above the rest. The former Manchester United lynchpin was a constant presence in Sir Alex Ferguson’s best teams over the years, winning countless honours at the club including a whole host of Premier League’s winners medals.

Scholes is a player who perhaps wasn’t fully appreciated when he was playing, but since his retirement his contributions to the Premier League have been more widely recognised.

In terms of hard-hitting defensive enforcers, Patrick Vieira was as good as they come. A key part of Arsenal’s ‘Invincibles’ team in the 2003-04 season, the Frenchman was not afraid to get in the faces of his opposing players and make life as difficult as possible.

Many think that Arsenal were never truly the same side under Arsène Wenger after Vieira departed the club in 2005, and that speaks volumes about his influence at Highbury.

We end with the most modern example, and there’s no doubt that David Silva deserves a mention for the effortless grace he brought to Manchester City’s midfield over the last decade or so.

Arriving at the club just before they began winning multiple Premier League titles and other domestic honours, Silva grew into one of the world’s best creative playmakers, possessing the ability to unlock defences with considerable ease.