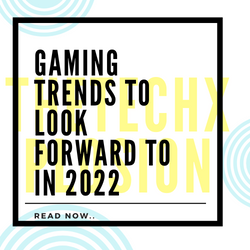 Online gaming has grown by leaps and bounds in the last few years. We’ve seen huge advancements, which technology that couldn’t be dreamed of even a decade or two ago. Thanks to these advancements, there’s even more to look forward to in the new year. Here are some of the top gaming trends to look out for in 2022.

Esports have been around for a long time and had slowly been creating a place for itself in sporting culture. With the onset of the pandemic though, it’s very much become the biggest thing in gaming. While we couldn’t go out to game with each other, we could get together virtually to compete, or watch professional teams compete. After all, they weren’t hindered by the fact they couldn’t be in the same room as their team.

That had a knock on effect on the betting and casino market, too. There have been some eSports markets available on betting and casino sites like these, and these have only increased as time went on. Now, there’s lots to choose from, and you can follow some of your favourite teams from these sportsbooks.

This is another trend that’s been around for a while, but is going to start finding its place in gaming in 2022. With more VR devices available from several different companies, you’ve never had such better choice for getting into VR gaming.

It’s another way that gamers have been staying in touch with each other, when they couldn’t get together physically. VR spaces have become very popular, and they’re only going to be more popular with time.

VR games are improving too, moving away from gimmick showcases and becoming fully involved games that will engross the player in their world.

As well as virtual reality, augmented reality is going to have a moment in 2022. We’ve been seeing it in gaming for a while, with a version of it being available on the 3DS, and it was used in the hugely popular app game Pokemon Go.

Next year, we’re going to see more of this, especially combined with VR. AR enables the player to track their surroundings, and create a virtual track. There’s a lot of potential here, which hopefully game developers will be taking advantage of.

This is made possible thanks to the development of real time rendering platforms. This makes it possible for cross play to happen, and in the next year we’re going to see this become the expected norm from all new games.

Some gaming companies have already dipped their toes into cloud based gaming, with varying results. After all, it is a brand new idea, and it’s something that’s sure to pick up traction in 2022. Rather than buying a physical game, or owning a digital copy on a client like Steam, you’ll be able to stream games, much as you would with services like Netflix.

That will open up a lot of opportunities for you as a gamer, as you’ll be able to try out games and expand your horizons. As such, it’s going to make a real splash in the next year.

These are just a few of the trends that you can expect to see in the next year. There’s lots of new exciting technology being created, so you’ll be able to enjoy everything that’s on offer, and reap the benefits. Which trend are you the most excited for?