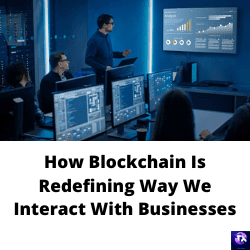 Blockchain technology is the advanced and revolutionary technology of our time. It is changing the way we interact with businesses. But do you know how?

How Will Blockchain Change the Way Organizations Work?

Altering how an organization conducts its core business is challenging. We all have observed the burden on firms, industries, and entire economies during the initial period of the internet. Employees sometimes resist change because they have grown accustomed to particular norms. Executives frequently oppose change because they are concerned about the expenses and associated dangers.

Despite the challenges, transformation is critical for every firm seeking to survive and thrive in this age of digital disruption. Blockchain has tremendous potential to grow and change the traditional business models.  Blockchain technology allows new ways of arranging economic activity, decreases the costs and time associated, and increases confidence in a network of participants.

We will explore the impact of blockchain and its impact on various industries. But, first, let’s explore what blockchain technology is.

What is Blockchain Technology?

A blockchain is a distributed database or ledger shared among computer networks known as nodes. A blockchain, like a database, saves information electronically in digital format. Blockchains are well known for their critical function in cryptocurrency systems like Bitcoin, where they keep a secure and decentralized record of transactions.

The blockchain’s innovation ensures the accuracy and security of a data record and produces trust without the requirement for a trusted third party. Blockchain has various benefits like transparency, immutability, decentralization, and many more. Blockchain development services have become multidimensional due to the increasing role of technology across multiple industries.

According to MIT Sloan Management studies, blockchain technology will fundamentally alter the nature of the global economy and bring about significant changes like:

Blockchain is still in its infancy, despite the excitement growing quickly. This can raise questions for potential investors. Anyone considering participating in such a young, fragile market should think twice only by considering how unpredictable bitcoin is.

But it’s essential to remember that Bitcoin and blockchain are distinct ideas. The most popular cryptocurrency is just one aspect of blockchain. The technology is receiving a lot of cash. In addition, every bank is investigating blockchain. An inevitable change is on its way. Technology has the potential to change almost anything. Only the food industry can utilize blockchain for several tasks.

How Is Blockchain Changing Global Market?

Blockchain technology is already disrupting the global market in several ways. Let’s examine how it will change these sectors.

Damages from cybercrime are anticipated to reach $10.5 trillion yearly by 2025. Although cybercrime is a big industry, blockchain can offer some relief. The system provides superior transactional security since it is innately transparent, immutable, and decentralized. Blockchains use complicated math and software restrictions to store data, making it nearly hard for attackers to change the data.

The growing use of blockchain might impact professionals involved in banking, contracts, settlements, or any other business activity, including being a third party to a transaction. With blockchain cryptography, the keeper of trust is no longer a third party. Blockchain can help businesses or people trade assets more efficiently by eliminating intermediaries and their associated expenses.

Blockchain technology can bring more transparency between all the participants in the supply chain, which business owners sometimes lack.

Increasing supply chain transparency also aids in confirming details like the legitimacy of parts and ethical sourcing. Blockchain technology allows a business to give stakeholders and investors access to auditable, digitally permanent documents. Transparency and effective audits are among the most popular approaches for enhancing the supply chain.

Blockchain has the potential to change a lot of things in our personal and professional lives. The new business opportunities include processing insurance claims, tracking environmental issues, corporate governance, air traffic control drones, voting, and more. Blockchain technology has brought a brave new world of endless possibilities which businesses can embrace.

Undoubtedly, blockchain is a futuristic technology that will continue to dominate the corporate sector in the coming years. However, to build genuine company ideas, it is necessary to grasp how blockchain transforms the way we do business. Learn more about blockchain foundations and gain valuable insights for starting your own blockchain-based business.