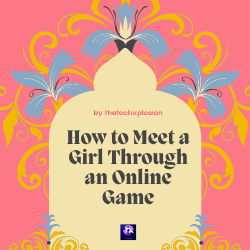 Nothing is better than meeting someone who has a lot in common with you. If you’re a major gamer, then it’s only natural for you to want to meet someone who shares your affinity for digital entertainment. Don’t worry, though; it’s not difficult to ask a girl out through an online game. We’ll show you what to do!

Video Games as a Bridge to Asking a Girl Out

Using online games is not always the best place to ask for a date. There are too many people around, and you might not be sure someone is single. Instead, the better idea is to think of online games as a bridge to get the girl to go out with you. You can start by using a website to start finding romantic partners who are definitely single and mention that they like video games in their profiles. Once you start talking to them and get them interested in playing an online game with you, then you can ask them to be exclusive with you within the game. Of course, the other option you have is to just meet someone online organically and lead into the question of asking them out. The only issue with that is it can take more time, and it’s not as direct as meeting someone for romance on a dating service. If you feel confident that you can find partners in such a manner, then starting out as friends on a game and progressive would make a great story to tell people.

Top Games You Should Consider

When you are thinking about meeting someone to date through an online game, you must consider which titles are going to be most beneficial. You need to think about games that you can spend a lot of time interacting with other players rather than ones where the match ends, and your friend disappears. One of the best games that you can use to meet romantic partners and cultivate a relationship is Minecraft. The concept of this game is survival and world-building, which lends itself to finding and meeting people for romance. Another great game in the same vein with challenging survival and building elements is Valheim, a newer game that emphasizes the same connections between players. MMORPGs are always a popular game genre in which you can seek romantic partners. Many MMOs, like World of Warcraft, have hosted weddings in the game that have then led to real-life weddings between two characters. The same can be said of famous titles like Everquest, Ultima Online, and Final Fantasy XIV. Together, these games comprise a very popular form of entertainment that lends itself to developing relationships between people who play together as strangers and then get to know each other as friends. Of course, other games exist that you should check out if you’re looking for friends. Sandbox games like Grand Theft Auto V help connect people as they join forces on heists and spend hours talking to each other about strategies. All you need is to meet someone special and then let the relationship develop naturally.

Everyone wants to be a part of a relationship with someone who understands their needs and desires. Meeting someone who is a fan of video games is something that many gamers aspire to. With that in mind, you should be aware that you can both use video games as a proving ground for potential relationships or as a place where you can host dates that you set by meeting someone on a dating service. Finding love with gamers is not difficult; you just need to know how to make it a reality!