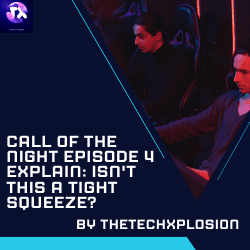 At school time, Akira notices intently as a teacher scolds one of the students for sleeping in the classroom. When he argues that he is not getting sufficient rest, the teacher tells the whole class students to be aware of their sleeping habits as it would be better for them to develop a nice habit very early on. And Akira, who has been sleeping less for a long while now understands the values of the teacher’s advice but does not have any idea how to deal with her own demons.

Later that night, she attempts to sleep but repetitive thoughts keep her up regardless of how much she tries to sleep. Meanwhile, Kou figures out to sneak out of his home like always without arousing any doubt. He heads to the playground close to the apartment & sees Nazuna sitting alone. Kou finds it odd that he managed to find her with such ease as it is notoriously difficult for him to get a hold of her on most nights. Without doing meet with Nazuna, he just walks away from the playground.

Kou is still wrecked by the kiss that they shared the earlier night & is clueless about how he should be behaving in front. He walks to different places present in the city and contemplates the importance of the incident. He presumes that he has most likely fallen in love with Nazuna and he can now finally fulfill his wish of turning into a vampire. At that point, Nazuna ends up finding him by herself. When she confronts him, he shares his thoughts about the argument also with the kiss that it is the correct time for her to transform him into a vampire.

Nazuna drinks her blood without passing any arguments. But Kou is shocked that he did not transform into a vampire. Nazuna argues that it is not shocking at all since Kou is clearly not in love yet & was just sexually aroused after her kiss. In the past time, Kou has never had such an experience, he can’t explain the difference between love & lust. In the meantime, Akira who is unable to sleep decides to go out wearing her school costume to the surprise of no one.