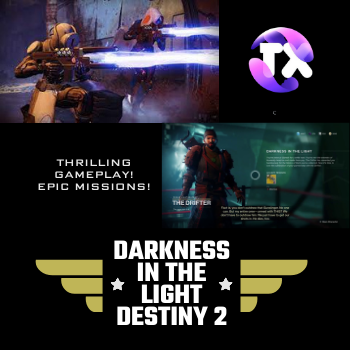 Hey Guys, Welcome to Thetechxplosion, and today we will discuss the darkness in the light destiny 2 game mode and many other things in this blog post. Destiny 2 game succeeds where the original failed the most. It delivers a story-driven campaign, good enough to match its finely tuned first-person shooter gameplay and great looks. Gathering loot and upgrades through missions and activities was our fire team and they finally running the climactic raid together was a blast and Every time I thought that I was scraping, destiny 2 teased me and many people were more to see and that was just a few light levels away.

From the opening moments, destiny 2 delivers Dominus Ghaul. An excellent antagonist whose cruelty deserves our fury. The campaign is filled with brilliant cutscenes that give the cast an opportunity to show the great emotional range and you can hear the sadness and determination in their voices. This exotic video game context kept us moving forward through fun missions set in eye-catching environments including the exhilarating penultimate mission. There will be an enemy team with their malfeasance exotic weapon.

EXPLORE THE AMAZING xur location this week , Xur is the shady vendor who wears a hood and delivers exotics to all the Destiny 2 guardians every week.

Darkness in the Light

Darkness in the light is the name of malfeasance exotic quest in destiny 2. A game that brings you the ultimate exotic quest that you were craving for all these times. You have to go through different stages with hand in favorite your powerful weapon to complete the mission with blasting the enemy guardian.

Darkness in the Destiny 2 Guide

Firstly, you have to get the seething heart, which is only obtainable by killing the ascendant primeval servitor bosses in gambit with a heavy weapon, because gambit bosses or ascendant primeval servitor bosses are randomized and you will have to play through matches until it shows up. Then in the city of secret that sets you on a quest to defeat 25 yellow-bar taken enemy as well as the mini-bosses in the dreaming city and this is a very difficult quest step in the dreaming city of this video game.

The blind well is a great opportunity to fill this exotic quest as it spawns several mini-bosses in the ending phases. With the bosses beaten, you will be given a special version of the malfeasance quest strike. You can start it through the dreaming city map, so hope it and you will receive the depleted weapon core item as a reward.

The malfeasance strike is going to be tough, so bring your allies, take it back to the drifter to push to the next phase. And then in the next stage of the game, you will head back to the gambit. Grab yourself a strong team of allies because you need to win all the ten gambit matches or insufferable mission. Any loss will doubly subtract from your total, so try to play as safely as possible. Depositing them as soon as waves end. It lights out, now you need to kill 25 guardians in gambit or either kill your nearby enemies during invasions three times.

You can sign up your friends who are good at shooting. Once you complete the lights out quest step then you will get the dark exotic weapon core item. Take it to the drifter and then exchange it for malfeasance.

What is Darkness in the light destiny 2, Exotic Hand Cannon?