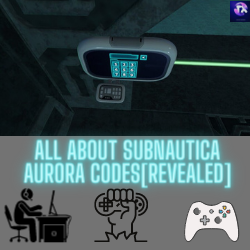 Everyone enjoys playing open-world survival games because they are packed with action and adventure. Subnautica is an example of a game that has received worldwide acclaim for its thrilling gameplay. Subnautica Aurora Codes will assist you in continuing the game and strengthening your persona.

In this tutorial, we’ll go through all of Subnautica’s Aurora Door Codes. In Subnautica, if you want to board the Aurora, you must first wait for the engine to blow. And it only happens after a few days in-game, after which players are able to explore it.

Subnautica is an open-world survival video game that was released on January 23, 2018 by Unknown Worlds Entertainment. The storyline is set in the 22nd century, with an open-world map centred on the planet 4546B. There are four different game types to choose from. Creative, Survival, Freedom, and Hardcore are the game styles. Subnautica, also known as “Underwater Minecraft,” is a famous survival game which will keep you engaged for a long time.

When you first launch Subnautica, you’ll find a downed spaceship nearby. The Aurora is the name of this ship, and it doesn’t provide any assistance at first. Following the crash-landing of their ship Aurora, players are able to navigate an alien planet universe. One of the challenges players face is looting the ship. However, once you’ve obtained the necessary resources and the door codes mentioned below, you’ll discover that it contains a plethora of equipment to aid you in the game.

How Do You Get Into The Aurora?

You’ll need to find a way inside the Subnautica Aurora before you can break any of the codes. There are two ways to get to the main location from here. The first entry is next to the beach, near the shipwreck. Clear the entryway behind the floodlight as you reach the right side of the beach. The entrance leads directly to Aurora’s laboratory.

If you don’t want to head to the beach, you should reach the ship’s stern, where there is a ramp. When you get to the other side of the ramp, you’ll see a hallway that leads right into the Aurora.

Getting Ready For The Aurora

Exploring the Aurora would necessitate any planning. To begin, put on your Radiation Suit to shield yourself from the ship’s damaged engine. To defend yourself against the cave crawlers, you’ll need a knife. The Stasis rifle and a Survival Knife are the weapons we suggest taking because they seem to be the most powerful.

Furthermore, you must have a repair kit with you to repair any damaged doors you can encounter. A Propulsion or Repulsion Cannon, a laser cutter, and a fire extinguisher are also needed. We suggest taking a Seaglide with you if you want to visit the Aurora’s underwater areas.

Exploration Of The Aurora

The PDA updates the Player on the state of The Aurora’s engine’s degeneration for many in-game days, before it explodes.

The blast is concentrated in the ship’s forward area. If the player is in the crash zone biome when the incident happens, he or she will be killed by the blast.

The Player will only explore inside the Aurora following the blast, so if they are not wearing a radiation suit, they can experience exposure over time. To counteract radiation exposure, all three sections of the suit must be fitted. The PDA warns that animals in the Aurora’s vicinity have remnants of human flesh in their digestive tracts, implying that all bodies have been eaten by Bleeders and Cave Crawlers. In addition, the Player may be injured by fire and flying rocks, and the hull shakes periodically. The Reaper Leviathans that breed around the ship, Cave Crawlers that clutter the ship’s entry area, and Bleeders in the Aurora’s underwater parts all pose additional dangers.

There is normally one patrolling between the basin west of the Aurora and the vast chasm under its bow to stop the Reapers. A Seamoth will slip by the Aurora by coming from the Protected Shallows closest to her and hugging her side until the distance is wide enough for the Seamoth to fit through. Since the Reaper would not usually swim too close to the entrance, it is advisable that you disembark in deeper water so that the ramp underneath you can shield you from a Reaper attack.

You’ll be able to enter the main arena after you’ve collected enough of these tools. You’ll see a lot of doors that are locked when you navigate the ship. You won’t be able to board the ship because the doors are closed, and you’ll need to use the Subnautica Aurora Door Codes to do so.

Repair Tool – On the Aurora in Subnautica, you can use this tool to restore your Drive Room and any damaged doors.

Laser Cutter – Use Laser Cutter to gain access to different rooms, such as the Prawn Suit Bay and Black Box Terminal.

Survival Knife – It can aid in the eradication of any remaining bleeders.

Propulsion Cannon / Repulsion Cannon – This will help you remove crates and barriers, especially those in the main hallway and Laboratory entrance.

A Weapon – You can use this to protect some Cave Crawlers. It’s possible that this is the Propulsion/Repulsion Cannon you use to remove barriers on the Aurora.

A Seaglide – In Subnautica, you’ll need one of these to navigate the Aurora’s underwater parts.

Here’s All The Subnautica Aurora Door Codes That You Require:

You can’t unlock these doors without the door codes. These codes will appear as you advance through the plot and complete the necessary levels. You can also obtain the codes from the in-game store. The game’s in-game store allows you to buy the required things.

If you don’t want to waste much money, you can use shortcuts or cheat codes. The following is a list of all active Subnautica door codes. Many Subnautica Aurora doors operate with the following codes. To open the aurora gate, you should try your luck.

Accessing the Lab – If you entered the Aurora through the first direction, you would find yourself in the lab. You should use the Repulsion Cannon to clear out any of the boxes that are in your path.

Accessing the Cargo Bay – To open the cargo bay doors, enter the code. You should use your Cannon to remove any boxes or debris in your path once more. Simply climb to the top of the cargo to gain access.

Accessing the Locker Room – In order to enter the locker room, you must first break through the sealed door. Once you’ve done that, enter the code. Batteries, drinks, and first-aid kits are available in the locker room.

Once onboard the Aurora, you’ll need a code for two more rooms: Captain’s Quarters and Robotics Bay.

How Do I Unlock the Aurora Doors?

As you explore the boats, you will find Aurora’s locked doors. You would not be able to enter because you lack the appropriate item to open the entrance. To easily open the Aurora gate, simply go to the locked door and pick the panel where you can manually input the code.

Select any of the above-mentioned codes and manually type it into the screen. You must try each of these codes one by one before the door opens.

The Subnautica Door Codes are changed on a daily basis. We’ll update this article as soon as the latest Subnautic door codes are available on the web site. Continue to check this page for an up-to-date list of Subnautica Aurora Codes.

Subnautica is a one-of-a-kind game in which you can navigate the earth’s aquatic world. As you advance through the game, you can gain a variety of skills. By completing the given stages and challenges, you can become a master of the game by improving your abilities and gathering all of the required pieces.

That’s it! That concludes the codes. Subnautica, unlike most games, has very few hidden rooms, which we appreciate as gamers. You now have a plethora of useful loot and equipment to help you in your exploration of the seas!

And now that you have all that you need to know about Aurora Subnautica’s door codes, you’re ready to explore this massive ship. We just need to invite you to discover this mysterious universe with the requisite recommendations, now that you learned all the secrets about Subnautica Aurora codes.

The game is accessible on macOS, Microsoft Windows, PlayStation 4, Nintendo Switch, and Xbox One.