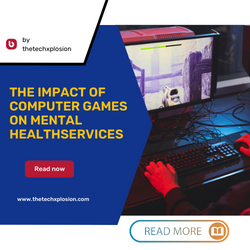 Nowadays, almost every family has a computer. This has long ceased to be an unaffordable luxury, now a computer is more of a necessity. Adults use it for work, creativity and to perform various other operations. Children and teenagers tend to use the computer for entertainment, that is, to play computer games. A person interacts with a computer game, unlike a movie, book, or performance. He is not just a spectator or reader, but a participant in the action. This, no matter how you look at it, affects him, especially at the moment when the games have reached the point where local and world competitions are held in which teams of players fight for big cash prizes, annual events are held with millions of viewers, in which these most games represent. Games are a separate large industry that has caught up with the industry of cinema, print, and so on.

Many scientists, analyzing this influence, consider it as a dual one: on the one hand, some games form an addiction, contribute to distancing from social life, and can cause a feeling of loneliness. But today it is entirely up to the parents. In the 21st century, digital parenting is as important for a child as learning personal hygiene. On the other hand, computer games develop coordination and concentration, ingenuity, logical thinking, and creative abilities to varying degrees.

The impact of different games on mental health:

Example: “World of Warcraft” –  it is, first of all, a team game. The most famous, most popular and one of the longest-lived online role-playing games. In World of Warcraft, having gold is very important. Without it, you are nothing but a set of skills and a name – even without a mount. You need gold to buy skills, items, gear, and more. You can earn gold by completing quests, and the most impatient can buy cheap WoW gold from various official sources.

Example:”Fortnite” is a fast-paced, co-op sandbox game with a battle royale mode. Dopamine, one of the brain’s primary neurotransmitters, is released by the joy of surviving difficult digital scenarios, varied skins, and post-ironic dances.

Example: “The Room” is a rather difficult but very atmospheric puzzle game. The essence seems simple and clear: the player moves through several rooms in which he finds boxes, they need to be opened in search of clues, hidden switches and other things necessary to go further. Such games motivate and uplift the spirit after passing each small passage of the game.

Example: “Syberia” was released in 2002. And immediately she fell in love with many players so much that until now, twenty years later, they remember her, love her and from time to time start playing again. Perhaps the main secret of the charm of “Siberia” is the combination of an unusual plot and that kind of naive romance that is neither too sweet nor bitter..

Scientists have conducted a study, as a result of which they confirmed that video games help people cope with the symptoms of mental illness. During the quarantine, the number of diseases diagnosed by doctors, such as depression or anxiety disorder, has increased. According to scientists, just 30 minutes of the game is enough to alleviate the course of mental illness.

The scientists also noted that almost all studied genres help to cope with mood swings, reduce and prevent anxiety, and increase the feeling of pleasure. Not only the gameplay has a positive effect, but also the visual component of the games. In addition, the researchers stated that therapy with the help of computer games is more accessible than going to a doctor and does not carry a negative stigma in society.

The researchers ran an experiment in which people were passing a short math test before being given the option of playing a video game or using a meditation and relaxation app. People who were playing the smartphone game were found to be more enthusiastic. Subjects who used the relaxing app, on the other hand, reported a decrease in energy but no increase in strength.

The research’s second part of the experiment involved people playing games for a few weekdays after returning from work. By the conclusion of the experiment, they claimed a sense of calm more than those who were prompted to utilize the meditation app.

In reply to these data, the study’s authors concluded that video games directly fit four criteria for post-work recovery: they assist players relax, teach new skills, distract them from issues, and allow them to regain self-control.

Stress, worries, and anxiety can be reduced by worrying on a schedule. Worrying is meant to be on a schedule so you can reduce your stress levels, improve your mental well-being, and find solutions to the problems that cause you worry.

Experiments with video games can be quite unexpected – for example, in the United States, video games were included in the rehabilitation program for prisoners. In Oregon prisons, the number of violations has decreased after the opportunity to play on simple consoles was introduced as an encouragement. By the way, the good behavior reward program included not only games, but also an increase in the number of visits and even a chance to eat ice cream – so it probably worked together.

Related to this is another field of research: can video games affect the ability of any people to have compassion, understanding and respect for the feelings of others? They developed a game that is as close to entertaining as possible: in it, the alien is forced to act in unfamiliar conditions, showing various emotions. Psychologists have found that after gaming sessions, the subjects experienced changes in parts of the brain responsible for emotional regulation and, ultimately, empathy.