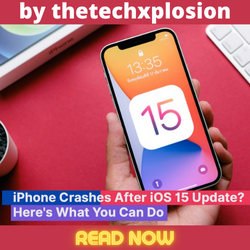 So, you’re rocking your new iPhone or iPad, and suddenly it crashes! You’re not alone. Many users have suffered similar problems previously when iOS was a fairly new smartphone operating system. However, until recently, Apple has done a fairly decent job with releasing the firmware improvements.

Apple has changed my mind about iOS software updates, and I believe there are other users, too, who feel the same way. Although the iPhone and iPad are great devices, Apple has missed the mark with the iOS 15 update. Many users have reported iPhones experiencing hanging up and software crashing after the latest update. Apple’s HomeKit is the latest security bug that’s been causing crashes. The bug can brick your iPhone and a restore does not fix the issue.

The HomeKit framework lets users connect and control their smart home devices using Apple products. If the name of the HomeKit device got changed and replaced by a long string, the iPhone would crash. What’s even worse, if the user restored their iPhone and signed back into their iCloud account, the device would crash again. The HomeKit device would get logged and saved on the user’s iCloud account causing the crash to reoccur. Apple confirmed the bug and promised a solution would be available before 2022, but sadly hasn’t offered an official solution yet.

Fortunately, troubleshooting this problem is easy and manageable for users. Firstly restore the impacted iPhone via Recovery mode or Device Firmware Update mode (DFU). Next, you will need to set up the device using your preferred settings but do not sign in to your iCloud. Once the setup gets finished, sign in to your iCloud account from the Settings menu. Once that’s completed, immediately disable “Home.” The device and iCloud should now function as normal.

Other iOS 15 bugs and fixes

Other bugs are going involving the latest iOS 15 version. I have come up with a few fixes that can help resolve most of them.

If you notice your iPhone crashing or acting buggy, the first step is to reset your phone. Often it’s your iPhone overclocking, so simply resetting your device is enough to fix the issue. Press and hold the power and either of the two-volume buttons until the slide to power off message appears. Drag the slider to turn off your device. Wait one or two minutes before turning on the device. Start using your device as you would normally and look for signs of slowing down or a dip in general performance.

Restore your iPhone via iCloud backup

We shouldn’t disregard the iPhone’s ongoing troubles, as every new software release has some minor bugs that need ironing out. It’s easy to download and install an incompatible app version that turns out to be incompatible with your device.

By restoring your iPhone you can effectively resolve several software-related difficulties. You can use an iCloud backup to restore your device to an older more stable version.

Check if some unrecognized apps are running in the background.

You may check the Activity log to see if any unrecognized apps run in the background. The battery usage of each app gets displayed in the Activity menu by how many resources it consumed. It can give you an indication of an unidentified program or service is taking up resources and crashing your iPhone. So, if you suspect that some apps use too much background battery power, you may use this service to confirm your doubts or suspicions. You can also examine the app organized by the percentage of battery consumption activity by selecting the display activity tab. You can also see how many minutes each app has used up your battery.

WANNA READ : How to Use a Windows Keyboard with a Mac?

However, some programs, such as cell phone monitoring app, do not appear in the active apps list or the app tray. These applications allow you to spy on iOS 15 devices from afar.

These apps might be annoying since they are used as disguised iPhone spyware for iOS 15 and higher. Cell phone monitoring apps work in stealth mode and they gather data from the target device and saves them to a user’s online account. Broadly speaking, these tracking apps allow parents or businesses to deal with the challenges of cybersecurity and monitor their children’s or workers’ internet and phone usage. They may also monitor them to ensure they utilize their time for education and work instead of texting and using social media.

Despite running in stealth mode, IOS 15 monitoring app continues to operate and track the phone’s activity remotely as long as the service remains active. Because the software runs in the background, it consumes valuable resources causing the phone to slow down and become sluggish. But it can get fixed easily by doing a factory reset of your iPhone. To remove these apps from your iPhone, you will need to factory reset your device. When you delete the app, your battery life should restore to normal.

If your iPhone apps continue to crash after updating to iOS 15, you can contact Apple for assistance. Patches for the latest iOS version get released by the official developers. Keep an eye out for any bug fixes or the latest software release. Make a copy of your data when you decide to factory reset your iPhone. And install the necessary apps first to try and narrow down the problematic apps.