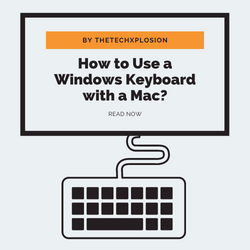 How to Use a Windows Keyboard with a Mac?

While it seems confusing, you won’t have many challenges with these keys. However, you will have issues when you decide to use other Mac functions you are familiar with on your Windows keyboard. Beginning from the Control, Command, Option, and the left keys are swapped with the Alt, Windows, and Control keys on a Windows keyboard.

For instance, your Control Key on Windows performs the same function on the Mac. Similarly, the Option keys on Mac work like the Alt Key, whereas the Command key is identical to your Window key.

The main issue is with the arrangement of the keys. On Mac, the arrangement is Control, Option, and Command, whereas, on Windows, it is Control, Windows, and Alt key. Since most people remember hitting the Alt key when using a Windows keyboard, it’s natural to hit the Option key for Mac. The same applies when using the other keys such as Control and Windows.

Because of this, it is confusing for someone who has adapted to Windows to get used to it. Interestingly, Apple has resolved this issue, making it easier for anyone to know how to Use a Windows Keyboard with a Mac.

Instead of using the Control, Command, and Option keyboard layout, you must remap modifier keys. The process below will enable you to modify the Command and Option keys. Apple has included a built-in option that allows you to modify keys on your keyboard. Here is the process to achieve that.

Step One – Connecting the Keyboard

Connect your Windows keyboard to the Mac system. You need to go to “System Preferences.” To do that, on the upper left corner, you will see the Apple icon; click on it.

When you click on the “System Preference,” it will take you to where you will see several things to set. Look for the keyboard tap and click on “Modifier keys.”

A new window will pop up, showing where to select the keyboard. Select the USB keyboard you connected in step one. You will also see the “Apple internal Keyboard/Trackpad.”

After selecting the USB keyboard, you can reconfigure the keys. You will see five options below the “Select Keyboard” section. Ensure you leave the Control key and Caps Lock Key the way it is. However, you can change the Option Key action to Command. In the same way, change the Command key action as Option.

To accept the changes made, you need to hit the OK button. Now, your Windows keyboard can work using the Alt and Option keys.

There is another way out to use a Windows keyboard with a Mac. Besides the first method, you can use a third-party app. From the image below, you can see that using the default Apple method comes with a limitation. However, it is easy to personalize your keyboard experience with a third-party key customizer.

You can use Karabiner-Elements to configure your Windows keyboard to work on a Mac. The third-party app enables you to remap all keys on your keyboard. Interestingly, you can create unique rules or select from already existing rules. You don’t have to pay or subscribe to the software as it is free to download.

Differences Between A Windows Keyboard And Mac Keyboard

If you didn’t check properly, you would think that your Mac and Windows keys are the same. While most of the keys have the same functions, they have a few differences. Let’s look at some differences that are evident from both keyboards.

Windows Key: When you observe carefully, you will see that the Mac keyboard has the Command key instead of the Windows key.

Control Key: This key replicates what the Control key can do on Mac.

Alt Key: On the Mac keyboard, you will see the Option key instead of the Alt key.

Backspace Key: You will see the Delete Key on the Mac Keyboard. For windows, it is the backspace key.

Delete Key: On most Windows keyboards, you will see it as “DEL” as it deletes characters from the right cursor side. However, when using a Mac keyboard, you have to hold the Fn key while pressing the Delete key to delete characters. Nowadays, the newer Windows keyboard also has the Fn key.

You don’t need to consult a computer professional to know how to use a Windows Keyboard with a Mac system. Setting up your Windows keyboard is a straightforward process that doesn’t require any technicality. Once you understand the difference between the keys, you can configure everything yourself.

If you feel using the System preference system is complicated, you can use the third-party option as it enables you to modify keys as you want. Whatever option you decide to follow, the goal is to use your Windows keyboard with a Mac.