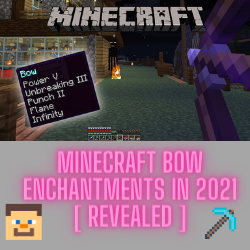 Hey Guys, Welcome to Thetechxplosion and Today we are going to discuss a very important topic of Minecraft that is Minecraft Bow Enchantments. These all are very powerful enchantments for bows and you should have a bit of experience as well as levels to enchants the gear.

You can use the Lapis Lazuli block to power your enchanting table. You know that luck of the sea decreases the catching junk items chance & increase the chance of catching big treasures. When you are working on wood and iron then the tool at tier 3 with the efficiency enchantment can get a 500% speed bonus and +167% speed bonus respectively. So let’s crack all the enchantment lists: –

WANNA KNOW : How to Make a Water Elevator in Minecraft { Guide }

So if you have a powerful one then it increases the arrow damage by 50% or half percent damage per shot. So it means that if you have power one, you can get 14 damage or about 7 hearts. Now at the max level of enchantment for power, you can have four power is power level 5, it means that you get 150% increase in arrow damage. And you do 23 damage in about eleven and a half hearts of damage. So it’s pretty significant and also it should be noted that it’s compatible with all the other enchantments. So you don’t worry about putting this basic enchantment.

On the second position, we are going to discuss enchantment for infinity. It allows you to basically keep shooting arrows even though you only have one in your inventory. So if the max level is level one ( obviously because it only has a single effect), it doesn’t apply to tipped or spectral arrows. So basically infinity won’t apply and you’ll need a full stack of those to keep shooting the infinite arrows.

It also incompatible with mending which is a major negative but you probably to choose whether you want affinity or mending on your bow. It’s definitely useful enchantment because then you won’t have to craft a ton of arrows. The affinity is pretty good because then you don’t have to go through a ton of arrows but mending means you can keep the same bow, so that’s kind of a difficult trade-off.

On the 3rd number, we have a max damage enchantment called flame bow enchantment. As the name would obviously imply that sets things on fire. So if you shoot an arrow at a mob, it will light it on fire or say it give a lightning strike. Now it is separate from the health damage by an arrow that mob would get it actually sets it on fire. You can get a punch or flame enchantment when your level of enchantment is high.

It gives it four damage over about a five-second span. Also, the maximum level of enchantment for the flame is one, so pretty much you just set the thing on fire. It will 2 or 3 hits to kill a zombie. And If you are wondering about the other uses for flames besides giving damage to mobs or killing them, you can also use them to light campfires as well as you can also use this common enchantment with TNT or you can use other random ideas for the use of this enchantment. So collect all the required things to create this enchantment in the enchantment table and use it. The fired arrow shot impact increase in the air and it gives extra damage to the far target that the max damage to enemies about 25%, 50%, and 75%.

Mending is the most valuable and enchantment in Minecraft and I would think, everyone would understand that if they played Minecraft enough. Basically, if get an XP of the orb and you have an item that’s enchanted with mending. And basically, when you get that XP Orb it all increases the durability of an item.

Why durability is important in Minecraft? It is very important because every item or every armor enchantment per piece, every weapon, every tool has the durability to it. Mending allows you to restore durability. The mending enchantment has a max level is 1.

You can store it through things like XP farms or through banks, now that furnaces can store XP and also it’s a very hard enchantment for mending to get. So the easy way to get it is AFK fishing by using fishing rods to get the mending book with enchantment. Or the other way especially with how 1.14 and the village and pillage update was done, you can do it through villager trading. By killing vindicators and Pillargers During the raids then there is a slight chance of getting an enchanted item and also there is a chance to drop of 8.5% when you kill a barter.

WANNA KNOW : How To Get Trident In Minecraft ( FAST AND EASY FULL GUIDE )

Summary of Mending with major points

One thing to keep in mind is that in order to restore an item that has to mend on it, you need to have it in your hand. You should have to try to have one item that can be restored on you. The XP will be chosen at random which item it goes to. So it’s possible if you have mending armor and then you have like a pickaxe that you want to restore on your hand.

And the last thing is that if there’s not much durability to restore and you are taking in XP, obviously it’s gonna go back to the players XP levels instead of just keeping going towards the armor. Some repairing points that Mending allows:

1. With the use of experience orbs, the mending allows to repair of the pickaxe and ax.

2.With the use of experience orbs, the mending allows repairing the shovel, boots, chest plate & elytra.

3. With the use of experience orbs, the mending allows to repair the bow & legging

4.With the use of experience orbs, the mending allows repairing the crossbow, trident, shield, and helmet.

5. Curse of Vanishing in Minecraft

Curse of Vanishing, so this is the curse enchantment one of two in Minecraft. So it basically means that when you die that item will disappear. So if you have the bow with really good enchantments on it and you happen to die, it’ll be bashed.& you can recover it.

You can only get this enchantment through chest loop, fishing, and villager trading. So, basically, just watch any of the bows that you can through these ways and also any enchanted books. So you don’t end up putting an enchanted book that has the curse of vanishing onto your bow.