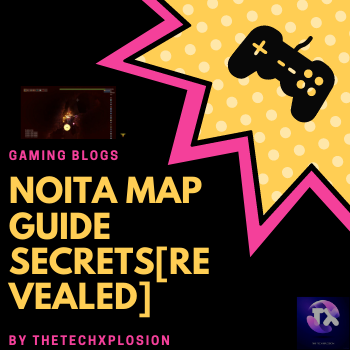 There are 13 Tablets scattered across the four corners of the world in white. Eleven of the tablet with an orb of true knowledge. The first time you collect one of these, you will receive a spell on subsequent runs. You are granted an additional max HP instead. First, we have got the secret Oram her Medus which is present in the tree. Most of us have drowned ourselves trying to get these things. Let us know everything about Noita Map Guide Secrets

You could get to it very easily just by drinking the water or bombing the bottom of the tree. This tablet is most likely a reference to the secret tomb, secret Orem which is a real-life hermetic.

How to get Tabulous Marina In Noita map

Then we get the Tabulous marina which you could find in the bottom right corner of the mines, right next to the lava lake which people already drained, so there’s lava everywhere over there to the right. Tabulous Marina is another name for the Emerald tablet.

To get the next one, we have to go down to the bottom of the lava lake. Now you could just use lava to blood and if you have that which is what was used here or there’s an easier way that we will talk about it.

How to find Emerald Tablet Volume 3 and 7

Once you are down at the bottom, you will see a little cave with Emerald Tablet Volume 3 and the Orbit true knowledge containing the nuke spell. And on the other side of that wall is the shortcut Chasm down to the snowy depths.

So you could just use the black hole or a matter eater to get through it, from here you just gonna work your way across the chasm which can be done at the beginning of the game, you don’t need to teleport for this at all.

You will find Emerald Tablet volume 7 and the orb of true knowledge containing the thunder cloud spell. This tablet is a reference to Fillol Appice, the metamorphosis of metals which is attributed to George Starkie.

After that, you will see a mountain or it is known for the holy mountain biome modifiers inside of the floating snowy island. Here you will be Het Emerald Tablet Volume 1 and the orb of true knowledge containing the sea of lava spell which you will already take from the back. This package is the first part of the real-life Emerald Tablet,

so it is Emerald Tablet Volume 1.

To get the next one, You will head deep into the desert and climb the pyramid and at the top, you will get the Emerald Tablet of Thoth together with the orb containing the earthquake spell and this one is a reference to the Turba Philosophorum.

Now inside the pyramid, at the lowest part of the pyramid, You will find the entrance to the sand cave. Make it down to the bottom center of that area inside the pyramid. To enter another orb room with the orb containing the necromancy spell and Emerald Tablet volume 4 which is another reference to the Turba Philosophorum and now for the fun part, you have to burrow or dig or somehow get through the desert from around the skull area. Until you will reach an area of beautiful yet alien design called the desert chasm and then down at the bottom of that place and it is very deep.

Then you will find another orb room with the orb containing the cement spell as well as Emerald Tablet volume 10 which is again a reference to the Turba Philosophorum. It also might be a clue or a hint at another alchemic preparation using gold and cement combined with fire or lava.

Yes, Several of these tablets is hinting at the developers. And then on the other side of the world in the snowy wasteland, you will fall down a chasm that originally had a bridge across it and find yourself in another vault make your way through there down the bottom. To Find another orb room with the orb containing the tentacle spell as well as Emerald Tablet volume 2 which is a reference to the museum Hermeticum.

Now go back on the surface and over to the right a little bit from the vault and dig in again, all the way down through the snow chasm which took longer to get to the bottom of than the desert chasm. Once you do make it down to the bottom and then you will find yet again another orb room with the orb containing the decoy deer spell as well as Emerald Tablet volume 9 which is a reference to the museum Hermeticum

ARE YOU GAMES LOVER THEN SEE OUR Gaming BLOGS ALSO!!

Now Once again back to the surface, On the left-hand side of the snowy depths biome or previous biomes. You will find the entrance to the magical temple which is extremely dark, so you have to navigate the dark Labyrinth which is full of ghost variety of enemies, Range Enemies and toxic sludge missed a preserve. And all the way over to the left, you will find another orb room with the orb containing the holy grenade spell as well as Emerald tablet Volume 5 which is a pretty reference to Monty Python and the Holy Grail.

To get the next Orban Tablet, you have to make it through the second fungal caverns biome. The one connected to the left side of both the underground jungle and the vault. Make it through there and you will find an orb room with the orb containing the spiral shots fell and Emerald Tablet volume 6 which is another reference to the museum Hermeticum. And it’s also a cheeky way for the developers to tell us that we’re gonna have to work really hard to find all of this true knowledge. You can take screenshots of your previous locations

We are close to the end
Now we are close to the end of the game or one of them intent and you have to head down through the lava and the easiest sanest way that to get through lava is by using the lava to blood spell. Once you make it through the lava there’s a thin layer of dense and dense rock that you also have to get through and then literal hell. Do not underestimate this area. This is area is full of a variety of enemies such as monsters and demons and it gives you a lot of damage quickly to your HP in few seconds or few minutes. This place will eat through your HP very quickly unless you play very carefully. So thank you for reading our whole post so please give us votes and do comments.