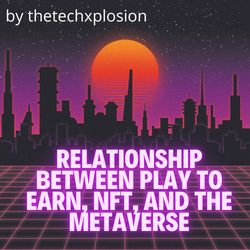 With the new creation of Web 3, several new concepts have emerged that aim to position themselves among the users of the blockchain platform and everything that it involves including bitvestment app.

Virtual reality, games, and cryptocurrencies seem to be the new language of the successor generations and big investors.

In order to understand a little more about the subject, the three most used terms from the middle of 2021 to date will be defined below.

What is an NFT?

Although its origin lay many years ago, it should be noted that its greatest boom occurred during the year 2021, when private users and famous entertainment and showbiz artists began to get involved.

Non-fungible tokens, as represented by its acronym (NFT), represent an authentic and unique digital asset, which belongs exclusively to its creator and can be auctioned or sold even for millions of dollars.

Its main objective is to position itself in the digital market to increase the acceptance levels of Blockchain users and investors, promoting a higher rate of investment in such a new concept of digital art.

With the announcement of the creator of Facebook, where it would become META, it generated great movements in terms of NFTs, to the point that they increased their sales thanks to this new virtual reality called Metaverse.

One of the most ethereal moments for the Metaverse was the announcement of the creator of Facebook, where the booming social network changed its name to Meta, which generated a stir and achieved outstanding sales of digital assets such as land in the Metaverse.

In fact, in the last week of October, it was revealed that more than $106 million worth of Metaverse land was sold in seven days.

Where does the interest in NFTs come from?

The millionaire profits generated by digital works of art and the following auctions that have been organized by traditional art galleries, which are beginning to immerse themselves in this new concept, are the main interest in NFTs.

Everything revolves around the profits received by digital artists, who, by the mere fact of having a certificate of authenticity, are owners of digital assets that could be worth thousands or millions of tokenizable dollars.

What is the Metaverse?

The Metaverse is the new proposal for a universe based on virtual reality, where anyone who wishes to be part of it must create an avatar that identifies them as a graphic representation in the 3D universe.

Many renowned technology companies invest their capital in such an impressive proposal since they see beyond a simple strategy of immersing human beings in a digital environment.

These large corporations intend to generate multimillion-dollar income by creating devices and equipment that adapt to users’ needs, from 3D Vision glasses to practical and comfortable mobile devices to be part of the Metaverse.

What does Play to earn refer to?

As its name suggests, Play to ear is the new concept where countless people worldwide play for money.

Although currently many of the users of the famous e-games Play for pleasure, it is expected that in a few years, all users will consider that the time invested in these applications should be remunerated.

There will even be great controversy regarding how this type of application pays its users to fulfill specific tasks, where the reward will be money as a traditional figure and cryptocurrencies.

Electronic games that represent the term Play to earn in a nutshell pay you for the attention you give to the game, as well as the time spent.

These three concepts that have set the standard in recent times are related because they are all interconnected through technology.

Perhaps this sounds a bit far-fetched, but it is not. If we analyze thoroughly, we can find that all these technological applications are based on and intend to work under the Blockchain platform.

Cryptocurrencies have taken over the digital market; their impact on the world economy will be more significant; we must understand that they are the future currencies and will be making most transactions with digital currencies or cryptocurrencies.

Looking closely during and after the COVID-19 pandemic, more platforms have offered Internet users new ways to generate income from home.