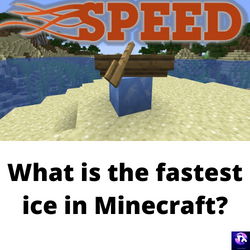 Welcome to the Techxplosion and today we will know the most askable question that is what is the fastest ice in Minecraft? Here you will know about ice in Minecraft, its usability, Obtaining process, Data values, and Other Facts.

Blue ice is a blue-colored solid block in Minecraft that is almost similar to the Packed Ice. The Blue ice block is too slippery. Naturally or physically, Blue ice generates on the bottom part of icebergs and in some houses of snowy tundra villages. And it has a large arching structure in frozen ocean Biomes There are some features of Blue ice that are:

How To Obtain Blue Ice?

We can obtain Blue Ice block with the use of any tool enchanted with silk touch, and using the Pickaxe tool is the fastest way. It will drop nothing by breaking the block without a silk touch. Breaking Time are as follow:

The points value for each unenchanted wielding tool by the user has been measured in seconds so don’t panic.

What is the faster Ice in Minecraft?

Through the packed ice, blue ice, and a combination of both ice, you can able to build ice tracks in all three dimensions for short & long-range travel. The boats or ships can also travel faster on blue ice in water currents. And you can reach a top speed of approximately 72.73 M/s(meters/sec). On the other hand, we can only reach at a speed of 40 M/s on packed ice. So I hope that now you will know why the blue ice block is faster than the packed ice.

Faster Ways To Travel In Minecraft?

1. Usually you will be running around at 5 blocks a second or if you are jumping while sprinting. But there are dozens of machines and methods that you can use to go much faster.

2. One of the fastest of these is a tunnel in Minecraft. With dolphins spread along with it, speed 2 and boots. Just wear your leather boots. You will fly down the tube at an enormous speed, 144 blocks a second to be exact which is amazing.

3. While you cannot place water in the nether, you can place ice blocks. Meaning that you can build an iceboat tunnel and just press left shift to dismount. Here, you can only travel 72 blocks a second.

4. In fact, the highways are faster than running with speed 255 in the overworld. That is almost twice the speed that you can reach in spectator mode.

5. Find, by the way, you probably know that jumping while sprinting is faster than just sprinting. But if you have speed 2 or above, it is faster to stay on the ground. However, none of these methods are the fastest Minecraft has to offer. You probably use ender pearls to get into awkward spaces in your world. But they are actually the key to traveling over a million blocks a second.

6. Using the gigantic machine, you can use TNT to launch your pearl super far. It aligns the ender pearl to the perfect pixel. Then uses over 100,000 TNT to explode the ender pearl away. After just a few secs of in-game time, it lands over 3 million blocks away.

7. There are most domestic ways to travel quickly too. End pearl stasis chambers are one of the most popular. Using a simple setup like linked up to other nations.

8. Dying is technically also an instant teleportation method. If you are far enough away from your spawn point, it can even be the fastest in your game. Just be careful not to leave your gear 5 million blocks away.

9. While we are on the subject, what’s the fastest way to travel upwards? The most commonly used method for this is a soul sand bubble elevator.

10. Luckily, there are some other crazy machines, you can use to propel yourself skyward. For starters, there is the classic TNT launcher. Through TNT shoot you can fly thousands of blocks per second and this makes this method so crazy.