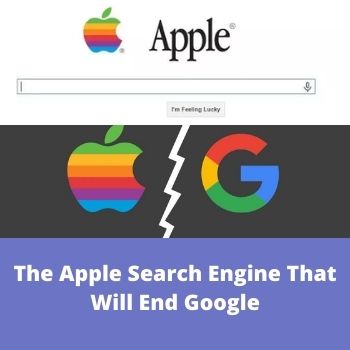 Hey Guys, Let us know about this wonderful news about The Apple Search Engine That Will End Google. Google has paid billions of dollars for the privilege of being the apple default Search Engine. But recently there has been evidence that Apple is going to be making its own Search Engine to take on Google. Now let’s talk about deeply.

As you know very well that Google is part of our lives and Intact we rely on Google every Single Day.
Every single day, It’s the biggest Search Engine in the World and It’s a term that we use so frequently.

SEARCH ENGINE allows us to search for anything that we want online and we gain that information instantly. So how do we know that Apple is going to be building its own Search Engine?

Google has been hit by a massive anti-trust Lawsuit by the Government of the United States of America which could also potentially hurt Apple in the future.

So Some of the Details in the Government’s lawsuit Suggest that Google pays Apple 8 to 12 Billion Dollars Every Single Year to make sure that Safari Users will see Google as its default Search engine.

As a result of paying Apple, it means That it’s significantly boosting Apple’s Revenue Every Single Year. But also ensure that everyone is still using Google Every Single Day.

Now unfortunately this means that Google is excluding and locking out smaller competitors from the Internet Industry and from Apple’s platform. Because of that the US Government finds Google’s Monopoly Unlawful.

So Some more Reason I am suggesting that Apple is Creating its own Search Engine so Apple are going on a massive talent hunt and they have been advertising for search Engineers.
This also includes for Apple maps two and a half years ago , The Apple hired John G Andrea.

John used to be the Head of Search at Google, so this might suggest that Apple has been working on bringing on their own Search Engine for a while.

In IOS 14 Spotlight Search de-emphasizes or Entirely by Passes Google’s Results. It Shows the news Results first instead of the general results that Google would show. Apple has also updated its web Crawler support page which is Called APPLEBOT with new information of how it’s ranks results.

Apple Bot is what Siri and Spotlight Suggestions use to Search .

How Does the Apple Bots New Rankings work?

So what does all of this actually mean?

Firstly , it monitors how you Engage with a Specific Website through the time that you spend on that specific site.

Secondly , A number of times in which a specific topic has been mentioned in an Article and if it matches the search Criteria.

Thirdly , the number of links from other web pages that help Boost the Authority to another website.

All of which are key Characteristics of what a Search Engine actually does , it looks for a better answer on Billions of Websites for that Specific Keyword or query.
Apple Bot has reportedly started crawling website more frequently and more Aggressively.

Why are People Losing trust in Google?

So Google owns roughly 95 percent of the market share mostly from Android which they have built and maintained to make sure that they are dominating the Search Engine.

Google Chrome was also built to support Google Search Engine on Pcs. Google was compelled to create a Search choice Screen for Android Users During the Setup of their new Devices. This has been slightly Controversial because it’s allowing users to select an Alternative to Google. But of Course not many people are Going to be Doing that because Google has been the most Established Search Engine for so many years.

So we have Understood from some of the Evidence that Apple is Building its own Search Engine.

Why Apple Should Build its own Search Engine?

So if you ask ELON MUSK what he’s actually scared of he will tell you it’s Google Controls. All of our Online Searches Without us knowing it and there isn’t much Transparency with what they actually do with that Data.

And they have been known to sell personal information before.
So Apple wants to regulate this and Since they are a company that is starting to build everything in-house. They also want to do the same with the Search Engine.

It’s a Strategic capability that Apple ultimately wants in order to better the control users Experience and showcase Content and Apps on its mobile Devices and the Key to all of this that Apple can provide an on-device web Search Capability which of course Google cannot do As Apple is providing.