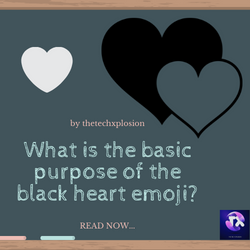 Moreover, it is linked with strongly sad emotions and feelings. Nonetheless, there are only a few emojis like this one, as compared to other types of emojis.

This is one of the rarely used heart emojis and because of the secret meanings behind this emoji, most people avoid using this. By just copying & pasting your favorite black heart emoji, you can express your feelings through your digital device.

If you are wondering why this beautiful and graceful heart is considered as the least-used emoji, you can find all the possible reasons written below. Let’s dive into this article.

The black heart emoji was introduced by the Unicode Consortium in 2016, with several other new emojis including those with drooling faces and facepalm. It was added to Emoji 3.0 in 2016.

Although, a black heart emoji can have several meanings. But the foremost basic purpose of this emoji in communication is to represent the state of sadness or sorrowful feelings like extreme emptiness.

For instance, when someone is in an extremely sad situation, where he/she can not even explain their emotions to someone. Then many people use this emoji to show that they are dying from inside or their heart is dead.

There are many heart emojis that are famous, one of them is fire heart emoji.

Also, there are times when an individual is feeling empty from inside, and alone within the crowd, or when silence gets too loud. This is the best representation of the feelings that are associated with black hearts.

In other contexts, a dark heart emoji is used to precise a stressful, depressive state. Such as, an individual who is affected by severe anxiety or depression for a long time and now can not feel the pain anymore. In simple words, a state of mind where a person stops hoping for good and becomes hopeless and used to the pain. This black heart represents this state of mind too.

Blackheart emoji is not only associated with negative things but it can also be used as your obsession with black color. Many people love the black color so much so when they post their pictures in a black outfit on social media they usually use black heart emoji. This emoji can be used to show your affection for this graceful color.

If you want to send some positive vibes to your dear ones you can use this emoji in a different context like to advise them to remain strong, be determined, nearly good things are going to happen with them, they just need to wait for the darkness to fade out. Like there is always a dark night before a bright morning.

Last but not least, instead of considering the above-discussed meanings of the dark heart emoji, I would like to share something important here that its meaning is changed with the various mindsets of each individual. A black heart emoji is often perceived in any context consistent with the perception of the one that is using it.

However, the black heart emoji was recently used in a trend on all social platforms to express support for the “Black Lives Matter” movement.