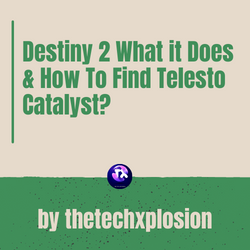 Telesto has Detroit harbinger’s pulse. It reloads the equipped kinetic and energy weapons from reserves immediately during multi-killing with this weapon. The previous statement means is that both your kinetic weapon and Telesto itself get reloaded upon multi-kills. Fusion projectiles attach & also detonate with a delayed void blast. The Telesto masterwork catalyst will increase your magazine from four to seven and also extend your reserves to twenty-one.

It has a polymer grip which increases the handling speed and has intrinsic traits of unplanned retrieve, this causes the fusion projectiles to attach the enemies and detonate with a delayed explosion. The interesting fact about Telesto is it essentially does not have damage fall off because the damage is primarily done by the explosion and not the projectile itself.

Now to get a Telesto weapon, you can obtain it from any random drop plan any activity. Now to get the catalyst, you will need to go to Nessus then load it into the leviathan raids “the eater of the worlds”. You will need to be the prestige version and you can get it from any chest in that prestige version raid. And there is a Telesto exotic catalyst chess glitch where you could go into the raid and the farm for the catalyst.

What Does The Catalyst Do?

It increases how much ammo you can carry in reserves. But it also increases the size of the Magazine from 4 to 7 which is really in PvE and can be useful in PVP as well. You have a chance to get the catalyst from legend and master lost sectors.

It does 40 damage per bolt and it fires 7 bold per shot. In order to defeat an opposing guardian, you need to hit 5 out of 7 bolts. Accounting for the charge time, Telesto has an optimal time-kill of 0.93 seconds. This seems a little bit high but to successfully use fusion rifles, you want to pre-charge when you know an enemy is approaching. Telesto is extremely good at this because even if you miss some of your shots, the void bolts stick to the ground or wall and the enemies often walk into them.

Moving on to the stats on Telesto, overall the stats are really good compared to other fusion rifles. It has 85 impacts, 42 range which is a little bit low but as we said that the damage drop off doesn’t affect this weapon, then it has 81 stability, 82 reload speed, and 66 handlings. Then it has 46 aim assist and 66 recoil directions which are on the low end for fusion rifles. The mag size is only 4 which is flat-out bad. But with the catalyst that has improved quite a bit.

Telesto is definitely underrated in PvE. Between the perk that auto reloads it on multi-kills and the good area of effect damage. It can be easily used to clear out large groups of enemies without even reloading.

In PVP, the season of the chosen, it got a little bit of a buff. The fusion rifles range buff does not really apply to Telesto because the damage is from the bolt explosions not from the bolts themselves. However, it gets a minor buff from the reduction and camera movement when firing. Regardless of buffs and nerfs, many people think Telesto is an excellent weapon while shotguns and sniper are clearly the meta.

I think fusion rifles offer a unique playstyle that is different from both those weapon types. It relies more heavily on anticipating the enemy’s moves. With Telesto that is dialed more because you can spray Telesto on walls and floors where you expect enemy movement. Seriously though whether you play PvE or PVP then just pick up Telesto and spray it everywhere and have a good time. I only think that the downside of the Telesto is the fusion rifles learning curve.

HOW TO GET THE SUROS REGIME & ITS CATALYST IN DESTINY 2

In order to obtain the Suros Regime, you need to get this from exotic engram. You can get this gun from Zur sometimes he sells does sell this gun as well as getting it from exotic engram that he sells each week. Acquiring the gun is really isn’t all that hard to do. However, its catalyst is where is a lot of new players get confused. In order to obtain this stuff, you need to actually win matches in the crucible playlist and it said this drops more in both survival and trails. And interestingly enough, you can actually earn this catalyst from winning a round in the trails playlist, not even the whole game. In order to complete this catalyst, you need to kill the 300 guardians in the crucible playlist and the Suros is pretty easy to use, so this won’t be hard to do at all.