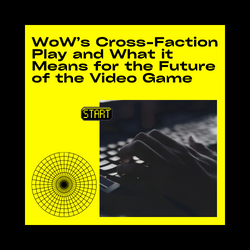 For over 17 years of video game existence, the struggle between the two sides has been the cornerstone of the entire gameplay. However, in 2022, everything will change when the cross-faction play appears, which will be a new milestone in the history of this video game. All these years the players were divided into two parts. Some joined the Horde, where the Orks, along with other allied races, tried to destroy the human race, while humans, with their allies, defended themselves in an attempt to fight off the enemy. The bloody battles did not subside for a minute, but everything will change soon. The two enemies will be allowed to start interacting with each other to try and end this war.

Starting to play, everyone makes a choice, which side to join and which race to choose. When wishing to enter the Alliance, players can choose to play as a Human, Dwarf, or Night Elf. If someone is leaning towards the Horde, then you can choose either an Orc, Troll, or Tauren. At first glance, this may seem like an easy choice, however, by choosing one of the factions, you become completely isolated from the other side. You get access to one type of content and your encounters with enemies take place only in battles or in neutral territories. For many, this meant that they were losing the opportunity to play alongside their friends who belonged to another party. Those who did not like this situation had to either start playing again, choose a different race, or pay to switch sides.

The other faction is your enemy. That is, you cannot interact or even understand each other in any way since you communicate in different languages. The upcoming change means that this barrier will finally fall, and therefore at the moment, it is difficult to understand how much everything will change and how the game will look further. However, there is some information available that lifts the veil of secrecy a little.

How will things work?

At the moment, it is known that as soon as a new expansion of the game is released, a big change will affect how the search for participants for the team will take place. If before, you could only see those players who belong to the same side as you, then soon, you will have more options, since now members of the other faction will also be displayed. However, whether your enemies will be part of your team depends only on you. The advantage is that the search for players will be much faster than before and you will spend less time trying to find a worthy participant.

The change will affect most of the game’s content. However, faction-specific content will remain unchanged, so don’t expect that there would be no confrontation. You will still need to work for the good of your faction and improve your character in every possible way.

Many people try to find the worthiest participants to complete raids and dungeons to pass even the most difficult levels as quickly and smoothly as possible. However, in addition to finding experienced players from the two factions, you can also use Mythic Boost, which will make your task much easier, and you can also get valuable rewards such as achievements, mounts, equipment, weapons, and much more.

Why is there a need for change?

It’s no secret that the last years for WoW were not the easiest. Restrictions related to the impossibility of playing with friends from other factions, boring and incomprehensible content, a mandatory surcharge for choosing a different race, and other negative aspects had a bad effect on the number of players. The company does not provide any information about the number of active participants, but it can be assumed that such events had a negative impact on the number of users playing.

In this regard, it became clear that a big change was needed, which would become a new milestone in the game. Being able to interact with members of another faction not only means you can play with your friends without any restrictions, but it also means that the future of the game will change with the appearance of new exciting content, where the Alliance and the Horde will stand side by side, fighting even bigger evil.

This was already in the game, but the truce did not last long. As soon as the common enemy was defeated, the confrontation between the factions returned. However, now this is a thaw in relations for a longer period.

How does this change affect the future of WoW?

There has always been war, but there have been brief lulls. These lulls still ended with the fact that everything still returned to normal and the two rivals were ready to cut each other’s throats. However, the Battle for Azeroth changed that.

Ultimately, both factions were led by councils made up of leaders from all races. If the Alliance quickly came to this, then the Horde had a sad history, but it all ended with a truce. Even though such a thaw in relations is unlikely to affect legacy content, it means that a new future lies ahead of us.

The most important thing is that no one is forced to declare peace. If you want to play by the traditional design, then this is your right. You are not required to play with members of another race. However, those who have been dreaming about it for years, trying to reach developers, will finally get this opportunity. It can be expected that those who have stopped playing will return, and those who have never played before will want to become a part of this gaming universe with great desire.

One can only guess what awaits the players with the release of the new expansion. However, details like this mean the game is about to change. The World of Warcraft will sparkle with new colors, giving players more options and choices, without being forced to do what they need. Players will be able to choose how they want to play. Such a positive change will arouse genuine interest among both experienced players and new ones.