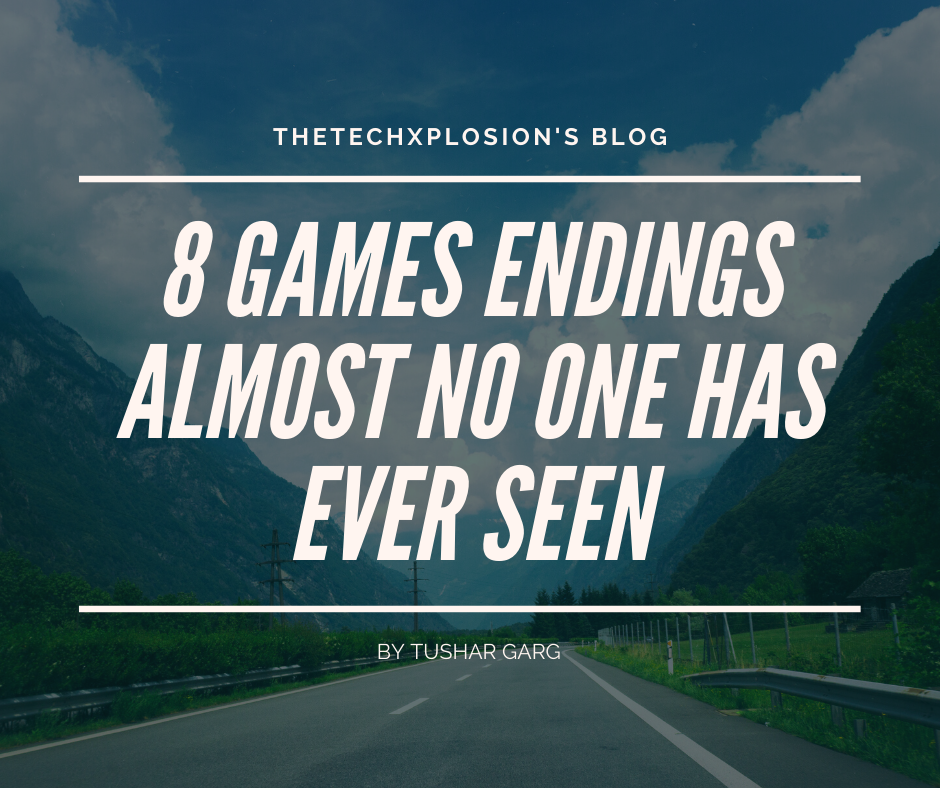 So here we are again to show you the best, There are so many games like temple run, subways suffer, dragon game when no internet and many more. We all know about these games but don’t know the endings of these games. We are soo excited to know the endings of these games so in this article I will show you the 8 games endings almost no one has ever seen. And also I will tell you how to use unusual tricks and secret features of the games, for example, the average time to complete the legendary half-life 2 is between more than a month but the world’s speed run record of this game is 41 minutes can you imagine?. IN THIS ARTICLE YOU WILL BE SURPRISE WHEN YOU WILL SEE ENDINGS

However, in the history of the gaming industry, there were games that were virtually endless almost no one saw their ending, sometimes games are too long like Tetris and sometimes they are too DIFFICULT TO COMPLETE.

This is the most widely known browser game from chrome that simply due to the fact that the browser offers to play it while you’re experiencing troubles with the internet connections this game is called google dino.

In 2018 this game was initialized 270 million times it seems that problems with the internet are a real disease of mankind.

The game is as simple as possible, In this game a dragon runs and we have to jump and prevent obstacles. This must be a hit if you have no internet. EVERYONE PLAYED GOOGLE DINO AT LEAST ONCE IN A LIFE. However, no user has ever reached the end of the game. Why do you think it’s too complicated not at all no matter how good you are doing on this game it never ends. Your dragon runs into an obstacle and the cycle starts all over again and again.

Edward Jung a google chrome engineer says it would take 17 million years to get to the point where the game system code ends. It’s difficult to imagine such a period of time especially in the context of a simple game, but if you actually manage to play it for 17million years then the game would simply end with your victory.

super meat boy is the coolest game of this generation. After all the craze for hardcore two-dimensional games began with it the peculiarity of super meat boy is in its crazy concept as you are offered to play a piece of raw meat and the gameplay is built on the properties of this material you need to glide over smooth surfaces bounce off the obstacles and move with an understanding of inertia and acceleration of the movement but the main thing is that each level is just a nightmare for those who like calm games just yawn for a second and your meat boy becomes minced meat.

Literally, if your timing is wrong you lose move too fast and your return to the checkpoint again. The game doesn’t punish too strictly for a mistake and you won’t have to start a level from start.

A super meet boy player requires the player to learn a level thoroughly in order to pass it successfully on the 50th try. In the end, a friend of the main hero sacrifices himself to help save the hero and his girlfriend. They are free now finally our piece of meat as won back is loved but suddenly some little monster falls on her head maybe its a hint of the coming part.

It is a very good example, the simpler the game seems to be in terms of visual design the more difficult it can turn out to be too play it. This game is full of unpleasant surprises. For example, a stone may suddenly fall on your head. All strong enemies are one thing but sudden obstacles that appear out of the blue are quite another.

When you were a kid did you like those cartoons about the black cloak of a superhero that looks like a batman but with a duck beak. Although the game only has seven levels and seven bosses. It sounds easy but it is so difficult and unpredictable it can drive you crazy even its ending breaks the usual pattern the black cloak rides his bike on a highway facing the dawn of a romantic mood and suddenly a stone appears on an empty road unnoticed by the hero.

What do you guys think maybe new part is coming in 2020? let us comment to know your views!

Sometimes the game has the ending that neither the players and not even the developer are aware of. Pacman is the best example, This game is from the Japanese developer Namco was released in 1980 and quickly became very popular. Its rules are simple there is a labyrinth in which dots are scattered the player controls something like an emoticon that moves through the maze and eats the dots at the same time it must run away from the ghosts at first and then for quite some time the game appears easy the ghosts remain slow and predictable. When you reach level 21, the difficulty increases sharply.

The ghost gets faster they also develop their own behavior patterns. They case the player using incomprehensible algorithms and they seem to be driving our smiley into a trap. This complexity led to the fact that the developers simply ever developed an ending they didn’t think that anyone can reach a hypothetical BAE NUMA. THEY were wrong after all pac-man had a bunch of fans. some of them roamed this maze for hours starting the game over and over again and they found that at level 255 the game start to glitch.

It was not a trick from developers but a system glitch that the most devoted fans learned about. The first half of level 256, the playing area filled with weird numbers and ghosts that don’t move but even this part can be passed and when it’s done the player is returned to the very first level but the ghosts now move with maximum speed.