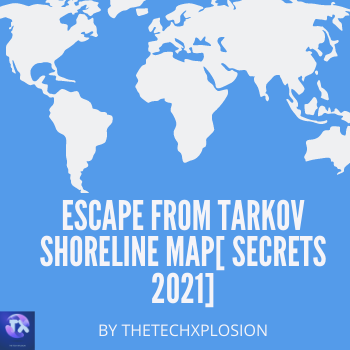 Escape from Tarkov is a challenging first-person shooter game, which has become a favorite of numerous gamers across the globe. Though its new update “Shoreline Map Tarkov” makes it so much more than that. We’ll talk about this newly launched update in a bit, but let’s understand a little more what exactly the game has to offer.

The game is beautiful, deep, challenging, complex yet frustrating, buggy, and a bit puzzling. What makes it different? Its adherence to a vision of a merciless, unforgiving, and brutal world provides it with the persona, which lacks in several games.

Most of all, Escape From Tarkov features the RPG elements in the fictional war-ravaged map called Tarkov. The game weaves together reflexes, skills, accuracy, and a thorough knowledge of the map. Sometimes, it can be pretty perplexing, but that’s what makes it even more interesting. Before you commence the intoxicating journey of Escape from Tarkov, all you need to know is, it’s not made for the casual players.

Interesting Facts You Might Not Know About Shoreline Map Tarkov

Ever since the game was introduced, it has been introducing a bunch of updates, in order to ensure the perfect gaming experience. The developers make constant changes in the game. A few months ago, it rolled out an update, which presented us with the new map called “Reserve Map Tarkov”. Now, the officials have introduced us to the new update, “Shoreline Map Tarkov”, which mainly consists of an enormous map called “Shoreline”. The new update has it all, it sure is going to provide you an exhilarating experience. It’s rather a bigger map in the game. But, not all the maps force you to bring in the use of sniper rifles.

Generally, it takes arduous efforts to play with shotguns, revolvers, knives in gigantic maps. The locations, houses, buildings, etc. within the new map are designed the way, you can get rid of your enemies. The map contains plenty of enormous buildings, so be sure to pick up the weapons that are capable enough to work out in the closer range.

What’s The Hype about Escape from Tarkov Shoreline Map?

Why is it called a shoreline map? It’s really simple because the map is situated along a riverside. The map requires excessive focus. It’s not that bewildering, but the focus is the key to get through it. It mainly consists of 8 to 13 players, and you’ll also be able to witness the radio station, village, gas station, gigantic three-story resort, and a small town.

Similar to the reserve map, shoreline map Tarkov comes with a considerable amount of loot as well. Looking at the west side of the newly introduced map, it has got some small towns, where you can explore plenty of things. Right in the middle, there will be a health resort. As the map is large, you can expect long-range combat with other players.

But as mentioned earlier, it is covered with areas where weapons with closer range are a must. It is the first time in the history of the FPS game where there’s a perfect combination of long and short-range combat.

Talking about the spawn points of the escape from Tarkov shoreline map, they are outside of the map and spaced apart. Some prominent parts of the map include a lighthouse, water, barge, swamp, radar tower, and the radio tower.

Resort In The middle of the shoreline map Tarkov

There’s always an area where most players gather together in an online FPS game. For instance, Pochinki in PUBG is the place where a bunch of people amasses to get the most skills. Similarly, a resort in the middle of the shoreline map is the place where most players kick in. Why? Because there is a host of things you can acquire at the resort. The resort comes with a total of three floors along with the basement.

The admin in shoreline map Tarkov comprises two floors and a basement as well, making it another valuable area of the map to acquire loots. There are other places for loot as well. In short, the new map has made certain that there will be no shortage of fruitful loots.

Now, speaking of the extraction points, they will be situated in the opposite direction. Looking at the southeast corner of the map, you will be able to witness an exit known as “road to customs”. Let’s get a bit into some details about the extractions points in escape from Tarkov shoreline map. Have a look below.

The chances are less of this PMC to remain always active. But, you can look at the green smoke near its location to find out whether or not the extraction is ready for business. Head to that big boulder with the flare on top in order to commence the timer of extraction.

Pier boat is the one and only extraction point within the Shoreline. Situated in the middle of the north edge of the map near the lighthouse, you will have to figure out if the boat there is flashing with lights or not to tell if the extraction is available for business or not. If you find it flashing, hop on to the wooden jetty stand by the boat to start the extract.

There are plenty of extraction points introduced with the new update “Shoreline map Tarkov”, which can’t be covered here. You can only know better by exploring yourself.

Escape From Tarkov Shoreline Map In a Nutshell