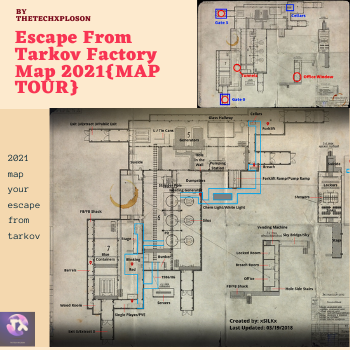 Escape from Tarkov is unquestionably one of a kind Battle Royale witnessed by FPS games lovers. It comes with impressive graphics, several levels, maps, etc. Some of its most played maps include Escape From Tarkov factory map , shoreline map, and reserve map.

Having the presence of many such games already, the makers have done an exceptional job to separate it from the likes of Apex Legends and Fortnite. Though escape from Tarkov is not much competitive in terms of popularity when comparing with Fortnite, but it’s sure to give you a thrilling experience.

The newbies who are going to play this game might want to know about some nitty-gritty of the map before they throw themselves in it. Therefore, here in this article, we’re laying out some information about the factory map, so that you don’t end up being perplexed while ranging over the game.

FACTORY MAP TARKOV IS THE SMALLEST

Of all the maps existing in the game, factory map tarkov is the smallest yet chaotic, which makes it one of a kind. It’s a map full of beans that come with an umpteen number of levels. Playing in this map brings you across the close quarter’s engagement because of the enclosed and semi-opened areas. Speaking of the levels, it includes a tunnel system underground, ground floor, second floor, and the third floor where the chaos is perpetual.

Escape From Tarkov Factory Map Was Rented Out Illegally By Terra

Before we get to the interpretation of this amusing map, let’s understand what caused a chemical plant rented by the Terra group to turn into a chaotic factory. Lore wise, escape from tarkov factory map was rented out illegally by Terra until the Tarkov conflict broke out. It was a stage of USES vs BEAR engagements. The premises of the factory was then turned into civilian shelters after the intervention of the UN. These shelters are now under the control of PMC and SCAVS operators.

With that being said, let’s dive right into,

What The Factory Map Has Got In Store For Us!!

Interesting Place To Explore in Escape From Tarkov Factory Map

The map is a bit short in terms of size, but the fun and chaos are endless. Below listed are the places on the map you can explore.

Having that said, let’s shine some light on the places where you can acquire the extraction points. There are not many places existing in the map to get the loot and extraction points, and it also might take arduous efforts to get cracking them. So, let’s take a look at exactly where you can find those places and what all would be required.

You would be bumping around everywhere on the map at each level without knowing how to claim those extraction points. Factory map is one tough playground because of its super tight quarters, and in order to make it out alive, you have to get the knack of getting extractions points for an agile exit when needed.

Down below at the left side in escape from tarkov factory map, you will come across a forklift vehicle nearby along with graffiti all over. There will be a small gate to enter there, entering through the door, there will be one more door to pass through, which will require a factory key. Get the key, and start extracting inside, but watch out for the hidden players awaiting you to get inside and get knocked out.

Located above at right in the map, Gate 3 requires the key for the extraction as either SCAVS or PMCs. All you need to do is to just enter, walk past that blue-colored container, and then go through another door (that requires no key) and commence the extractions. But again watch out for the enemies camping in this area of factory map tarkov awaiting you get the easy-peasy kills.

Situated in the northeast of the map, Cellars require the key to enter in. Passing through the door will lead you to the downstairs. Do down there following the downstairs and turn around to search for the door in the left. You’ll be requiring a factory key to open the door. Once you finally get the factory key, open the door and walk where it leads you to get the extraction points.

So, it was pretty much all you had to know before throwing yourself in the game. In a nutshell, this compact escape from tarkov factory map is small where your enemies will go haywire, so beware of their deadly shots at each second of the game.