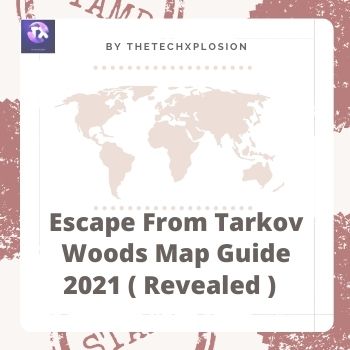 Today We will discuss woods map escape from Tarkov and we will cover all the locations of interest and little tips and tricks throughout the map. So woods is one of those maps that the majority of players absolutely hate. It’s one of those maps where if you’re good at long-range sniping and all that it’s a heap of fun but if you actually just don’t want to go in there to get your tasks done, it can be super frustrating.

The main reason behind that is it’s there’s no real cover from any direction at any time. The best option you have is to hug one of the walls and use that wall as a bit of cover because there’s so much open space.

You can generally get into a fight and within like 30 seconds to a minute of you getting in that fight, you are going to get third parties from somewhere else, and then there will be a fourth party coming in the fifth party and it’s just one of those things that it’s one of those maps where it’s really frustrating to get some tasks done but just be careful of that or just know that it’s one of those maps where you’ll probably die more than you’ll survive.

Woods has a maximum of 12 players and it’s all the normal day-night cycle and there’s only one key that is important to worry about. The key is the ZB-014 key and up until it was just another extract key to get out easily if there was a green smoker alert up there but even if the green smoke’s not there then there are 60 round 545 mags which can be really helpful.

You can take inventories from nearby houses and when you perusing around this map, must use walls as a way of defending 50 percent of the area. A lot of people will run through the main middle area and the problem with that in our opinion is that people that can shoot you from any direction and all it takes is a bit of noise your gunshot and a little bit of a glimpse of a person. Whereas if you stick towards keeping a wall to one of your sides, you are no longer have to worry about your left……

You will find mills on this map, one is a lumbermill. The lumbermill or lumber Yard itself is actually probably the most dangerous area on the woods map mostly because the Scavs boss can have himself with two minions and if he catches you off, he just double taps you with an SVD or an SKS with a BP Amo and absolutely destroys.

Woods map split in half down the middle for the spawn areas having them start equal distances away from the Log camp and wrapping around the edge of the map. The map itself is an oval with no extras, so if you just stick to a wall or the edge, you will circle the map eventually. Now for the landmarks moving clockwise, we have the UN Roadblock, RUAF Gate rubble field sniper, and overlook rock, beech rock, Deadman outskirts, Scav house, Bunker rocks, or east gate rocks, checkpoint, sniper Scav, Spine Rock, plane crash and old stations.

In terms of key landmarks, we have the lake factory and sniper escape mountain. If you can’t see any of those you’re either in the woods around the plane crash or in the outskirts, just keep walking, you’ll see at least one of them quickly. Now that you know where you’ll be once you spawn, let’s talk about finding your exit. No matter where you spawn you will have to cross the Log camp to get to your exit with the only exception being the vehicle exit, if you get lost the worst-case scenario is to just keep in mind where you spawned then move to, through, or pass the Log camp, then stay along the water and follow the wall on either side until it brings you to your extract. Just be careful around Sniper Rock on the west side and Deadmen on the east.

Make sure to double-tap to see your extract. The specific extracts if you spawn on the east will be RUAF Gate, ZP-016 Bunker, UN Roadblock, Old Station, and West Border. The Special extracts are going to be the gate to the factory where you will need to have made friends with a friendly player Scav.

The South Vehicle exit where you’ll need three thousand rubles and mountain stash where you will need the red rebel ice pick and a paracord as well as no armored vest to exit. You can still wear armored rigs by the way. If you spawn on the west you’ll have the bot dead man’s place outskirts, water outskirts, scav house, and East gate. The special exit will be the south vehicle for three thousand rubles.

ZP-014 bunker where you’ll need the key and sometimes you can get the mountain stash exit too.

You are guaranteed to get into a fight around the Log camp every raid because of the shape of the map and with it being the checkpoint in the center. When it comes to buildings, there are several but none are significantly important or intricate. There’s a safe in one of the scav huts and some scattered weapon boxes too.

Now we’re gonna get more into detail, first of which is the scav boss, Shturman who rocks an SPD and an AK along with two raiders, he tends to hang out around the scav huts and the Log camps and also has a stash that’s unlocked with a one-time-use key, you can find on his body. There are lots of dangerous areas and checkpoints on this map if you spawn around the outskirts, you need to immediately assume somebody’s watching you.

If a PVP player spawns in either of the western outskirts ponds, they can set up nasty ambushes, and if they have thermals, you are kind of screwed so keep that in mind. The most common tactics are for players to jump onto or sir around the bunker rocks to the south as well as deadman’s or maybe, go right to the beach rock to the north.