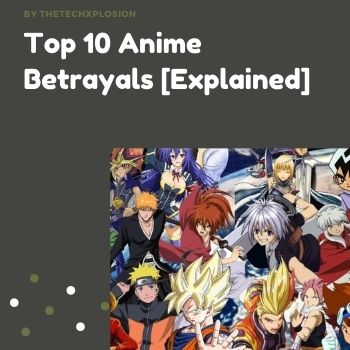 The number one in the Top 10 Anime Betrayals list is Dragon Ball Super. As you know Frieza is one the most powerful villain in the Dragon Ball series. In Dragon Ball Super, Frieza looked pretty happy to encounter his universe 6 counterpart at the tournament of power. Even gave him some helpful hints on how to improve the strength that is until he casually stabbed him in the back and got his ass booted from the tournament.

New Frieza was a devious bastard but he essentially got his brother from another mother erased without even flinching.

Sword Art Online Alternative Gun Gale Online is a light novel series of Japanese which is written by Keiichi Sigsawa. This is an adventurous, Action, sci-fiction series which is directed by Masayuki sakoi.

Since our pinked plotted gunslinger first enters the virtual world GGO. She had her best online buddy to help her through every obstacle and by that we mean snipe the shit of the players while she zipped around and tore through the straggler.

However it comes to PVP, friendship can only take you so far. while gearing up for the next conflict M tins on len and fires point-blank all because he’s scared to lose the game in the long run. and Someone just got unfriended.

Intro about this anime show

It is written and published by Hirohiko Araki and Shueisha respectively

The English name is Viz medi.

while he was certainly given one of the most heart-wrenching send-offs. we can’t exactly forget how much of a tool this kid was during his first appearance. Obviously, little slow in the head and eager to make ﻿his friends. Shigechi eagerly assisted Josuke and Okuyasu in the scheme to get rich quick.

Unfortunately, as soon as he gets a whiff of that green. He decided to steal it all from himself willing to go as far as to use the harvest to tear up the eyes of his former friends. Now we think about it maybe you did deserve to get blown up.

It stars a young Japanese kid who finds himself branded a criminal and sent to Tokyo on probation. There he meets up with a variety of other misfits and will eventually band with them to form an infamous group known as the mysterious thieves. They use a mysterious smartphone app to enter the hearts of various victims and try to steal their hearts and make them change their horrible ways.

This should come as no surprise to those who played the game and even those who only watched the anime adaptation could tell there was something shifty about this junior detective. Those doubts were fully realized when this temporary member of the fan and thieves confronted ren in an interrogation room. one of best Top 10 Anime Betrayals.

Instead of springing him free he straight-up shot in the head revealing himself to be the one responsible for the mental shutdowns.

Post Apocalyptic future where humanity is barely hanging on by a thread. Thanks to a mysterious organization, the remains of humanity have been saved by abandoning earth in exchange for living on plantations that provide the necessity to live comfortably. The plantations are mobile fortress cities that are protected by a young boy and girl group called parasites. one of my favorite Top 10 Anime Betrayals.

These parasites pilot the super cool super-expressive robots or Frank’s. The story starts off building this world in a slow but interesting. This Anime contains too many actions that drastically clash with lord downer.

Betrayal in Darling in the Franxx: Kokoro Cucks Futoshi

She was a little overzealous when it came to the niceties. After all, it was pretty obvious he was crushing on the quiet Kokoro from the start that being that said there is no denying it. She totally backhanded him here.

After promising to always stand beside him as his partner. She suddenly decided to swap out from Mitsuru because she got a random lady boner for him all with the space of the same episode. That scene was very emotional.

Kaiji is an honest and good boy. To make his life entertaining, he played gambling. He continuously plays gambling after that he meets a man who tells him about underworld gambling.

After accepting the proposal of that man, Kaiji plays big Gambling. If he wins then he gets 1000 times profit from normal little gambling or if he loses then he will do slavery for the whole life or he will die. This series contains many Gambling tasks.

Betrayal in Kaiji: Fear & Loathing on the Espoir

Greed can make a monster out of any man but even by that standard. This was a Douche move of epic proportions. After managing to devise a strategy that would free them from financial ruin.

The trifecta of kaiji, Ando and Feroro hata would let a single step away from leaving the gambling cruise liner. A little less debt-ribbon. All they had to do was buy Kaiji out of an impromptu prison. Kaiji was a tad too trusting since his partners in crime decided they rather keep as much of their newly acquired riches as possible. Leaving kaiji behind glass stripping him of his dignity and clothes in the process.

Steins; the gate is one of the greatest time travel anime series of all time. The main character of this anime name is Okabe Rintarou. He is a mad scientist and his age is 17 years old. Many people say the starting 10 episode is boring but this is totally wrong. one of my favorite Top 10 Anime Betrayals.

In the second half, the Time travel story starts. You will see many realistic things in the anime. this anime contains only 24 episodes but these 24 episodes will entertain and shocks you continuously.

Betrayal in Steins; Gate: Moeka Lays Down the Law

A femme Fatale with a penchant for skins tight suits and mirroring adolescence point blanking without battering an islet there. Okabe wishes he had no nerve before he started trading emails with these undercover sin agents.

The mad scientist had been playing around with time-travel too many times. Given how it got the attention of deadly organizations with a monopoly on the multiverse not to mention a slew of enforces ready to kill on command.

Moeka just so happened to be one such enforcer or one who shows zero regard for killing someone as angelic and perfect as Mayuri.

It is the latest anime produced by Netflix, marking a high-profile Devilman adaptation giving the franchise the attention it deserves for the exactly 12 Devilman fans that have been shouting about it before this existed.

Demons exist and are trying to fuck humans out of the world. Akirafudo is a shy virgin fuck boy who’s one day reunited with his childhood friend, Ryo Asuka. Informs Akira of demons and enlists his help to try and document and prove their existence.

To do so they go to an underground party with a lot of demon activity. After snorting some mad coke and a quick session of casual manslaughter. Forcing Akira to fuse with the demon while still maintaining the human heart. Finalizing his transformation to the Satanchap. Now the new Akirafudo’s adventure starts.

Betrayal in DevilmanCrybaby: Ryou is Literally the Devil

Ryou drops the biggest Bombshell of all when turns mankind on itself by exposing the existence of demons and even ounces best buddy Akira a demon on national television.

Of Course, that’s just scratching the surface as he turns out he’s also the princes of the bloody darkness. So if you keep in track, Ryou essentially was the one who is responsible for turning Akira into a demon hybrid in the first place god his waifu killed and doomed all of humanity and then released himself a satan in the most nonchalant way.

Set in an alternate universe slash fantasy world, humanity have been driven to almost extinction beings known as Titans. Titans arrived on this planet 100 years ago whose only purpose seems to be an act of devouring the humans of the planet.

Until even more impossibly large colossal titan appear by busting down one of the walls and suddenly it’s a massacre. During said massacre our main protagonist Eren witnesses his mother eaten, his hometown destroyed and virtually his whole life summated before his eyes.

WANNA SEE: Top 10 Most Expensive Pokemon Cards Of All Time[SECRET]

Without a doubt, the armored and colossal titans hold a great deal of responsibility for knocking humanity further down the food chain. So imagine our surprise when big brother Reina and nice guy Berthodt will releaved to be the culprits exposing their true identities in a moment of madness.

The veteran survey corp members lash out against their former friends in an act of desperation. Needless to say, eren was none too happy had been making nice with his mortal foes. Leading to a much-anticipated titan slugfest.

Betrayal: Garma get char’ed
This is what you get when you mess with the red comet despite appearing as close friends name char held no love for the zabi family due to their hand in the death of his father. As such, it was more than happy to trick the young Zeon captain into walking right into an earth federation trap.

Resulting in him getting promptly blown out of the sky. Garma may have been something of a royal prick but even we have to wince at how easily Char misled him right up until the moment of his death. Ironic considering he would go on to spelt this little gem later down the line.