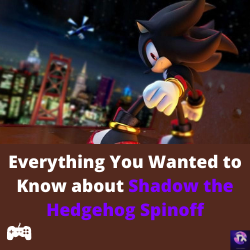 Though Sega cannot be considered successful as a video game console manufacturer, its ensemble of fun and devastatingly captivating games can fascinate the choosiest of gamers. And among all Sega’s gems, the Sonic titles occupy a special place. But in today’s article, we’re going to pay tribute to one of the most controversial installments in your favorite game franchise. Let’s take a look at Shadow the Hedgehog Spinoff, the title that shook the gaming and community and added a dark, gothic note to Sonic games.

Some History OF Shadow the Hedgehog Spinoff

While Shadow the Hedgehog was in development, Sega considered other spin-off titles based on Tails, Knuckles, and Dr. Eggman. The first rumors of a Sonic the Hedgehog spinoff arose in early 2005. Sega hosted an online poll asking which Sonic characters fans would like to see star in their own game. The four choices were Tails, Knuckles, Shadow, and Dr. Eggman. The poll also asked voters to pick their preferred subtitles for each of these characters’ hypothetical games. Shadow’s choices included Renegade Hedgehog, Rebel with a Cause, Chaos Unleashed, and Sonic’s Nemesis. While the poll appeared before the Shadow the Hedgehog was announced, it’s unlikely that it had much of an impact on the game’s direction. This is due to how close the poll was conducted before the game was revealed. Fans did impact the game in a significant way, however.

A promotional event was held in Japan where Shadow performed as a wrestling announcer and awarded the winning wrestler a pack of 10 Sonic games. The sonic creator also attended the event and commented on some of the game’s influences. They were also optimistic about Shadow’s franchise potential, and in the interview with Gamespy, they noted they bet big on Shadow and its role in the upcoming spinoff.

Shadow the Hedgehog was heavily influenced by the proliferation of first- and third-person shooters in the western market. While the Japanese Sonic team was developing a more traditional Sonic title, Sega Studios USA was tasked with developing a game that would have a greater directional impact on the series.

Shadow was chosen as a star of this new venture due to his popularity, being second only to Sonic. Another factor taken into consideration was Shadow’s moral ambiguity. Shadow is neither definitively good nor evil. So, by casting him as the main character, the team hoped that players would form their own impression about this mysterious guy. The game directors noted that the change in protagonists afforded the team an opportunity to introduce new elements that would feel out of place in classic Sonic games. One such element was the inclusion of curse words, such as ‘damn.’

Shadow the Hedgehog innovated the franchise by allowing players to drive vehicles and wield firearms. These features were met with uncertainty with many fans considering them to be somewhat out of place. Despite the controversy, the developers defended their inclusions. They emphasized their titular character’s uniqueness and originality, which itself necessitated the introduction of new features.

To mirror the game’s more mature tone, the team took inspiration from movies aimed at an older audience, including Underworld, Constantine, and Terminator.

References and Allusions OF Shadow the Hedgehog Spinoff

As well as inspirations, the game had many nods and references to pop culture. Upon the completion of the dark mission of the ARK level, the cut scene that plays shows the eclipse cannon destroying the White House in a reference to the 1996 movie Independence Day. Two of the game’s bosses, Blue Falcon, and Black Bull, share the names with vehicles from Nintendo’s F-Zero series.

The egg vacuum weapon is a reference to another franchise, Billy Hatcher and the Giant Egg. The game’s antagonist, Black Doom, also seems to be a reference to another Sonic team property. He bears an uncanny resemblance to Wizeman the Wicked, the antagonist of Nights into Dreams. Both characters take the form of a seemingly legless cloak with similar shoulder pads, neckwear pendants, and nine prominent horns on their heads. Both characters also have detachable eyes and were the creators of their respective game protagonists.

And now, it’s time you reunited with your favorite Shadow character and completed one of the most exciting missions Sonic gaming history has ever known.